The challenge in DSAR is to localize an object on ground using radio signal strength (RSS) measurements from drone-borne radio sniffers. The assumption is that the lost person has a radio transmitter, and our research scenario is to find Bluetooth Low Energy (BLE) devices such as smartphones, smart watches, ear buddies or key finders. However, there are many other application cases outside SaR where the problem to find radio transmitters occurs, for instance finding jammers or monitoring wildlife or livestock with BLE tags.

During the project , we have approached the DSAR challenge from two ends, the end user perspective and the research and development perspective. This has resulted in one hardware and one software platform:

To get our sensor system up in the air, we have used the enterprise drone DJI Matrice 210. Thiis series from DJI has an open architecture where our onboard controller can take over the planning of the mission and adapt on the fly. This model can carry a couple of kilograms payload, and is relatively weather resistance (can fly in gale and rain). We developed a sensor system consisting of the following parts: 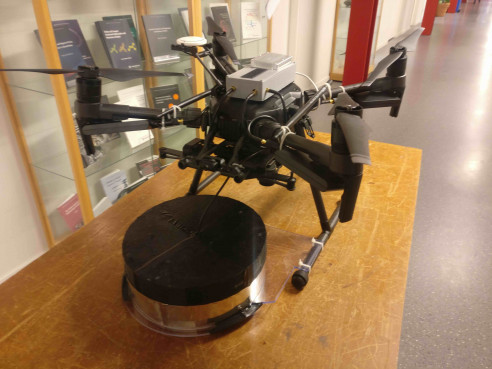 Starting from an App and Dashboard combination developed within Project Ngulia for park rangers in a rhino sanctuary in Kenya, that has been used and continuously developed for the past four years, we have adopted the software for a Missing People application. The app can be used by the search team for foot patrols, where there is a feature to report found objects or traces in the app. The app can also be placed on a drone for an aerial patrol. In both cases, Bluetooth transmitters within range are automatically detected, shown on the screen and reported to the system. The dashboard gives the search leader an overview of what everyone is doing and a summary of all reports. 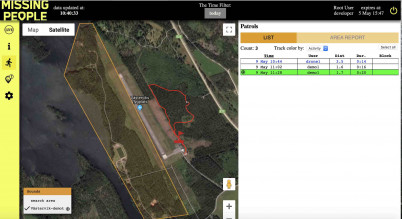 For the demo days in Västervik May 14-15 2019, we have prepared an app and dashboard that can be accessed by the visitors to follow, or even take part, in our DSAR operation. The app is exactly the version that is used on an on-board smartphone mounted on the drone. It uses the BLE sniffer and GNSS in the smartphone, and communicates over 4G to our cloud solution. The dashboard gets data from the cloud and shows the search area overplayed on Google Maps, the current position of our drones and possible app users on the ground. As soon as any app user comes inside range of the BLE objects hidden in the search area, a symbol will appear on the map. The pictures above shows a foot patrol carried out in advance of the drone demo.

The RSS measurements is quite informative at close distances, but is rather constant on longer distances, according to the so called log diststance model illustrated in the plot below. 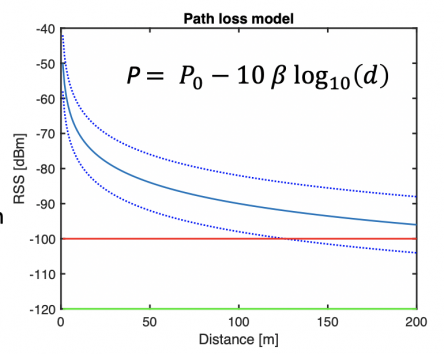 In the plot, the normal sensitivity of a BLE scanner at -100 dBm is marked with a red line, the maximum range of BLE in this case is about 200m, and the one sigma confidence interval of the RSS measurement is marked with dashed lines. With RSS measurements from several different and known positions (using GNSS information from the sensor platform the drone), one can trilaterate (the process of computing the intersection of many circles) the position. But as evident from the plot, the range information is rather inaccurate at longer distances.

It should be remarked that all radio signals obey this log distance model, so the same principles work for cellular radio, WiFi, GNSS and other radio standards.

The plot below illustrate a simulated scenario where the radio sniffer has measured RSS at 16 uniformly distributed positions close to the object. This can be done by a drone or a manual ground team using the same principles. The green dots shows the estimated position of the object with 30 Monte Carlo simulations. The precision is more than sufficient for finding a missing person, and the standard deviation is less than 10 meters, e.g. comparable to that the object would be able to transmit its GNSS position.

The second plot shows how likely every position is. Thus, we are quite sure that the object is not close to the positions where we have done the measurements (sharp and large peaks), and the shallow area in the middle is the most likely position.

The next plot shows the result of a DSAR experiment carried out at the ITN department at Linköping University as part of a course project supervised by David Gundlegård. 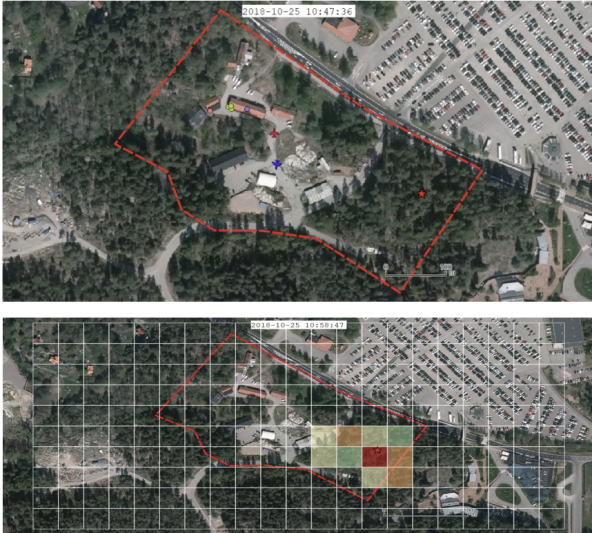 The first plot shows the known search area, the position of the object (cross in the eastern corner), the starting position of two drones, and the members of the SaR team. The second plot shows a heat map generated by the students based on the RSS measurements from the drones, where the red area is the most likely one to find the object.